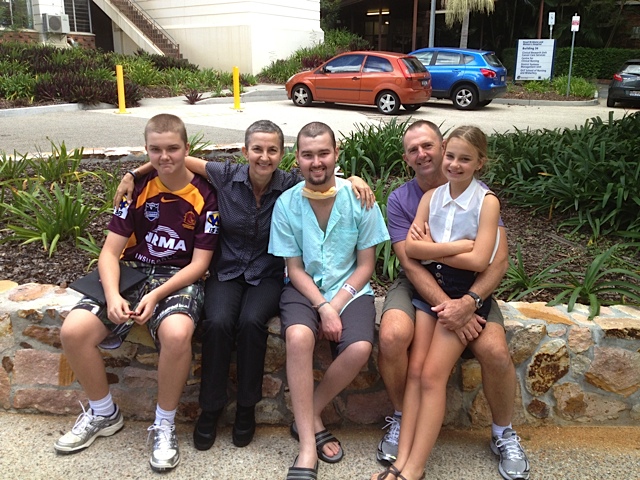 Adem Crosby, an employee at the Buderim Woolworths store was feeling a little unwell towards the end of 2010. In early 2011, a week after his 17th birthday and two days after starting year 12, Adem was diagnosed with Acute Lymphoblastic Leukaemia, and rushed to the Royal Brisbane Hospital for urgent life-saving treatment.

Adem’s treatment regime meant he would be in and out of hospital on a regular basis so needed to be close to hospital at all times. The Leukaemia Foundation of Queensland provided the Crosby family with accommodation at one of their Villages, free of charge, for their entire stay in Brisbane. Adem’s father (Brent) cared for him in Brisbane while his mother (Lu) looked after his younger brother and sister back in Buderim. Every weekend, his mother and siblings would travel to Brisbane so the family could be together.

Adem’s treatment consisted of four cycles of intense chemotherapy, followed by a stem cell transplant late in May 2011. After 9 months living in Brisbane, enduring extensive treatment Adem returned back home to Buderim in October 2011. Even though at home, Adem and his father Brent commuted to Brisbane on a weekly basis to see his doctors.

In January 2012 Adem was getting ready to start university and begin his dream of becoming an oncology nurse, but in the first week of February 2012 everything was thrown into disarray… Unfortunately, the leukaemia was back.

Adem and the family were back to square one, knowing that things were going to be a lot tougher this time around because of all the previous treatment. Once again, Brent and Adem moved back to Brisbane to endure another eight months of gruelling treatment and again the Leukaemia Foundation provided the family with accommodation so they could be close to the hospital and be able to spend weekends together.

In late September 2012, Adem was tearfully told the news by his doctor that his leukaemia was incurable. Adem and Brent moved back to Buderim so the family could spend quality time together which the family did until Adem peacefully passed away on May 4th 2013

Along with countless other families the Crosby’s are truly grateful for the support of housing, comfort and counsel the Leukaemia Foundation provided and for the wonderful generosity of blood donors, who without them many cancer patients would not survive.

Great News! We have been selected to participate i

Out early this morning to clean our Team Adem sign

Last week Lu on behalf of Team Adem visited the On

What a huge success the annual Chancellor State Co

How cool are these new Adem Crosby Centre staff sh