Miranda sacrifices her hair for Adem and Leukaemia 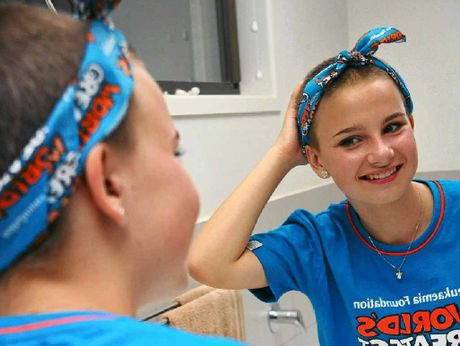 Miranda sacrifices her hair for Adem and Leukaemia

MOST teenage girls would shudder at the thought of losing their hair. But not Miranda Crosby. The pretty 14-year-old had more inspiration than most when she had the short-back-and-sides – she was doing it all for her late brother.

Adem Crosby  was the heart and soul of Team Adem – a fundraising phenomenon that has raised tens of thousands of dollars for leukaemia research. During his two-and-a-half-year battle with lymphoblastic leukaemia, Adem inspired family, friends and complete strangers to support the cause. On Friday, it was Miranda’s turn to have her head shaved at a Leukaemia Foundation’s World’s Greatest Shave event at Chancellor State School.

More than 2000 people turned out to watch students, teachers and even principals get their hair shaved, cut or coloured. About 15 girls also cut off their ponytails. Their hair will be turned into wigs for women undergoing cancer treatment.

“I always wanted to shave my head,” Miranda said. “I wanted to honour those people including my brother who went through cancer treatment. I’m proud of everyone involved. “The support was amazing. The whole school was cheering me on. So many girls and boys cut and shaved their hair.” Miranda is Team Adem’s biggest fundraiser for its World’s Greatest Shave campaign this year, eclipsing her goal of $10,000 and heading for the $12,000 mark.

Team Adem is well on the way to beating its fundraising goal of $50,000, with about $45,000 already in the kitty. This year is Team Adem’s first World’s Greatest Shave campaign without the teenager, who passed away in May last year. This Friday will be the Team Adem’s big event at the Buderim Marketplace. “In over four years we’ve raised more than $300,000 for the Leukaemia Foundation. It’s a pretty big effort by Team Adem and the community,” Adem’s father Brent said. “I just want to thank all our supporters, all our followers and the community for getting behind us.

“We’re sincerely thankful for all the help we get. This goes to help a lot of people and vital research.”

Those lining up for the Friday shave include Mr Crosby’s wife, Lu, and Mayor Mark Jamieson

Team Adem blood donors have made a life changing d

Team Adem was delighted to receive a very kind don

One of our most memorable achievements is the comm