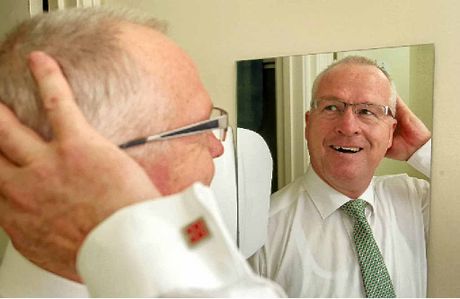 SUNSHINE Coast Mayor Mark Jamieson got more than he bargained for when he was invited to be a guest on local radio station Mix FM. The Mayor was challenged to shave his hair for charity as part of the World’s Greatest Shave. He agreed, but on the proviso $10,000 was raised for the Leukaemia Foundation.

“I remember one of my schoolteachers saying we all have a million hairs on our head, so I’m only asking for one cent for each strand,” he said. He was invited to join Team Adem, which has already raised more than a quarter of a million dollars for the foundation.

“It’s a great honour to be part of Team Adem,” Cr Jamieson said. “I met Adem Crosby on a number of occasions and he was a truly inspirational young man.

“What sticks with me about that meeting was Adem’s humility, sincerity and complete lack of self-pity.

“Here was a young man who had every reason to complain and question the fairness of it all, but instead he rose above it to think of others, and those who would follow him.

“Just four months later he lost his battle with cancer, and the Sunshine Coast was much poorer for his passing.”