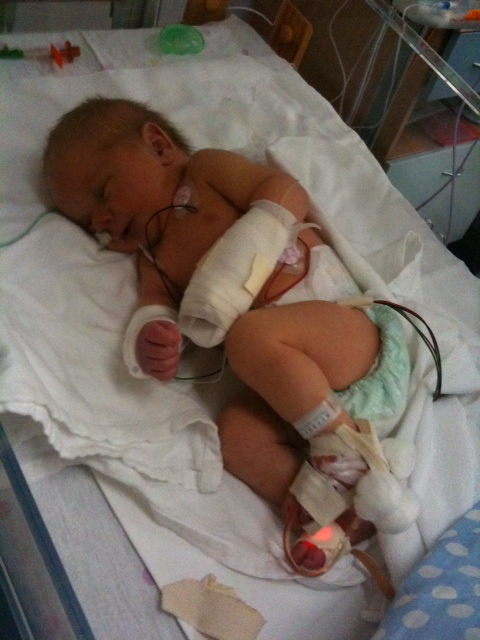 Our boy Hamish would not be with us today if it wasn’t for the many lifesaving blood transfusions he received as a newborn…. Hamish is one of the many recipients who is living testament of the importance of blood donation.

At 3.29pm on the 11th of June this year we welcomed our tricky, but gorgeous son Hamish into the world. We knew this delivery was going to come with so much excitement, however, underneath we were very nervous and unsure about what the next few weeks would be like, as we were already aware Hamish had a rare form of Congenital Heart Disease….

During our 20 week scan we found out I was carrying a little boy (nicknamed ‘Sunny’).  Unfortunately this scan also detected our baby had a condition called Transposition of the Great Arteries (TGA). This is a rare condition where the major vessels to and from the heart are transposed, or swapped around, and is not survivable without major surgery within the first few weeks of life. Although this diagnosis meant the rest of the pregnancy was very worrying, knowing about his condition beforehand meant we were able to make plans to relocate with our 4 year old from the Sunshine Coast to Brisbane. We stayed with family close to the hospital as we awaited his arrival. We had already secured accommodation at the amazing facility – Ronald McDonald House – for the time after I was discharged from hospital so we could be as close to Hamish during his extended hospital stay.

Thankfully, Hamish was born a good weight, 3085gms (6lb 13oz) and was relatively healthy. He required a special drug (Prostaglandin) to keep him alive. This drug gave him time to recover from his birth and adjust to the world, and gave the surgeons and medical staff time to get to know Hamish, his specific heart anatomy, and to plan for his operation. After some breathing difficulties, which can be a side-effect of this drug he was on, became evident on around day 4 of his life, it was decided he would be operated on when he was 7 days old.

On the 18th June everything was in place for his operation. We kissed & hugged him heaps and tearily sent him through the theatre doors. It was going to be a long 5-7hours… but once again, we were prepared. We had planned to go to New Farm Park (a very special place for our family) to walk, drink coffee, eat, pray and think warm thoughts about our darling baby.

When we returned to the hospital 5 ½ hours later we met with the cardiologist who reported the operation had been a success. I cried, we hugged – the feeling of happiness was overwhelming and hard to put in words. We were told the surgeon was closing Hamish’s chest and would be out to meet with us in around 40 minutes. We waited, waited, waited…. Around 2 hours later the cardiologist met with us again to tell us there were problems with Hamish’s lungs – he couldn’t get rid of Carbon Dioxide from his body so they had re-opened his chest. We were in total shock. This was something we hadn’t seen coming, let alone prepared for….

Our baby’s life was hanging in the balance, and we had no choice but to trust the medical staff and his little body to get him through. More time passed, and the cardiologist met with us again to say they had done everything they could and were left with no other option but to put Hamish on ECMO life support (a machine they have only had at the Mater for 4 years).  This was to give his small organs a chance to rest and hopefully recover. 10 ½ hours after entering the theatre, our precious boy was wheeled into ICU with the most unimaginable amount of tubes and drips attached to his tiny body, clinging to life… An image that still haunts us.

Each day for the next almost 2 weeks (while Hamish was in ICU) was so daunting. There were so many ups and downs. After 48 hours Hamish was successfully weaned off ECMO, then his kidneys began to fail. On dialysis his kidneys improved, then his gut stopped working properly. When his gut improved, he began retaining too much fluid. When his chest was closed successfully, fluid began pooling behind his right lung which resulted in his oxygen levels falling so low he had to be resuscitated. He then needed surgery to remove fluid from behind his tiny lung, when his right lung collapsed. After the fluid removal surgery was a success, he then developed a serious bacterial infection and began an intravenous antibiotic schedule for the next 3 weeks.  It was then detected that he had a heart rhythm problem. Our tiny boy then had a lumbar punch to test for meningitis, which came back negative, then his veins started collapsing after each dose of antibiotic…. This went on, and on. The roller coaster ride of thoughts and emotions was something we could never have prepared for.  Although we wanted to jump off, there was no way we were going to. We had no choice but to hang in there day and night for what seemed like an eternity.

When Hamish was five weeks old we were finally given the news we had waited so long for. “Hamish is well enough to go home”. Yay! More tears – this time utter excitement. Although we knew he would need regular check-ups at our local hospital, GP, Paediatrician and return to the Mater for his cardiologist checks, it was such a blessing to take him home.

Today Hamish is well and happy. Since being home he has continued to make amazing progress. The doctors and surgeon are still unsure about what happened to Hamish’s lungs during the first surgery. This part of his journey will forever remain a mystery to us, as will the amount of blood he received. When we asked medical staff how much he had needed, all they could say was A LOT.

We are so grateful Hamish received such amazing medical care, and for every single person whose donated blood was used to keep our baby boy alive.  There are countless strangers out there whom we will never know, and who may never know that their small contribution in donating blood saved my baby’s life. This donated blood served to replace the blood Hamish lost during his surgeries, it was vital to help run the heart-lung bypass used during Hamish’s heart surgery, it was used to run through the ECMO life support machine when post-surgery complications arose, and while in ICU Hamish was given a unit of blood when his oxygen levels were critically low.

Each day, as we watch our little miracle boy meet milestones, each time he smiles, giggles, rolls over, interacts with his big sister, sleeps peacefully in our arms, etc. we are reminded of the undeniable selflessness of all those who gave of themselves in ways of expertise, time and care.  And that list includes all of those who donated the blood needed to keep Hamish alive when he was a critically ill tiny baby. All of these people combined have given us the greatest gift of all – a future which includes being able to watch while Hamish grows up as a member of our precious family.