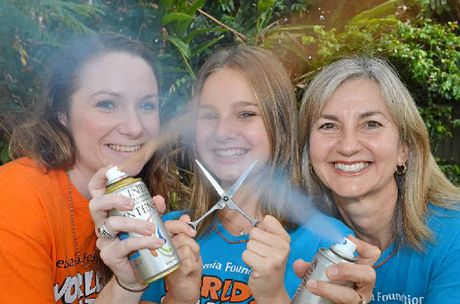 THESE three beautiful faces will soon be framed by shiny bald heads.

Buderim’s Lu Crosby, her 14-year-old daughter Miranda and family friend Alana Phillips will say goodbye to their luscious locks next month as part of the World’s Greatest Shave. While Lu will shave her head for the third time, Miranda and Alana make their debut as ‘baldies’.

The trio will be raising money as part of Team Adem, inspired by Lu’s late son Adem Crosby who died in May last year after a battle with leukaemia. Next month’s shave will be the first time Adem won’t be there to support his family and friends but his legacy has inspired the family to continue raising awareness for the Leukaemia Foundation.

“Miranda came to us and said she wanted to raise money for the foundation, and in support of her I decided to shave my head again,” Lu said. “Her push is finding a cure so that no other boy or girl loses a sibling. “Miranda was only 13 when she lost her brother. She wants to support other patients and their families,” Lu said.

Beside Lu and Miranda at the shave event will be son and brother Dan, 16, and husband and dad Brent.

“I won’t have to buy shampoo for the family for a few months,” Lu laughed.

WHERE: Buderim Marketplace at the front of Woolworths